What is Google BERT update? 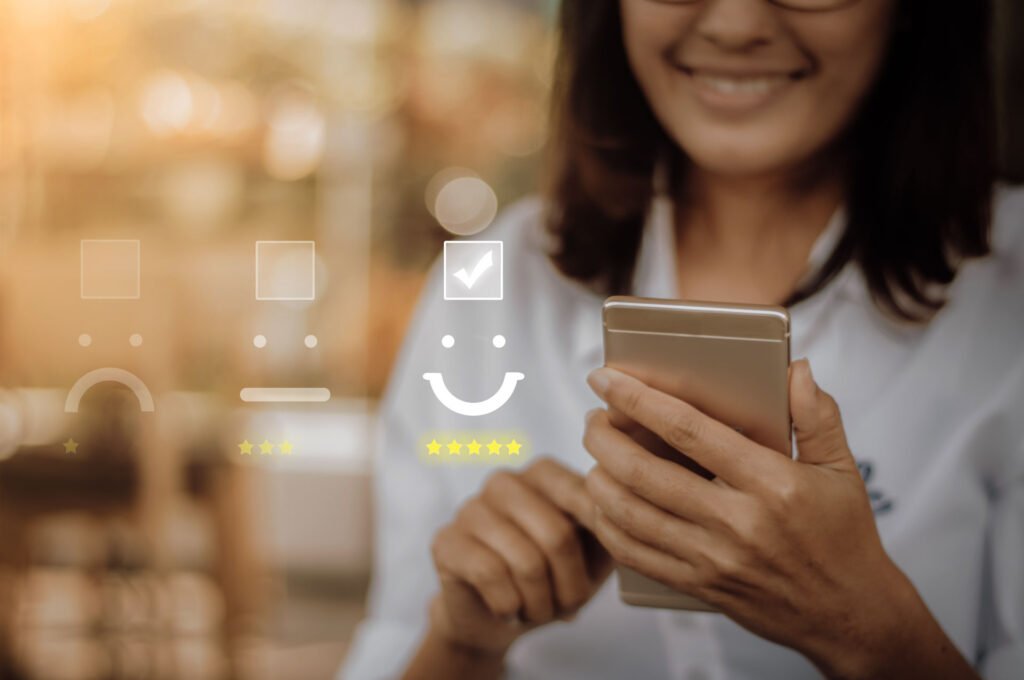 Google BERT Update is the biggest algorithm update in Google since Rank Brain. The reason why it was considered such a big update was because Google started understanding searches better than ever before. Google goal has always been to provide the best user experience possible.

Earlier, the search engine ranking system was all about matching results based on the keyword. Many irrelevant websites used to rank on the search engine result page. However, in 2013, things changed after the release of the Hummingbird update. Google started understanding the “search intent” and began giving results based on it. We witnessed “the rise of semantic search” from that era. With the BERT update, Google has started understanding the natural language better than ever before.

BERT stands for Bidirectional Encoder Representations from Transformers. With the BERT update, Google understanding of natural language has improved drastically. Google described the updated as it represents “biggest lead forward in the last 5 years, and one of the biggest leaps forward in the history of Search.”

How bert changed the google search?

This is what Google has said about their BERT update

“By applying BERT models to both ranking and featured snippets in Search, we’re able to do a much better job helping you find useful information. In fact, when it comes to ranking results, BERT will help Search better understand one in 10 searches in the U.S. in English, and we’ll bring this to more languages and locales over time.

Particularly for longer, more conversational queries, or searches where prepositions like “for” and “to” matter a lot to the meaning, Search will be able to understand the context of the words in your query. You can search in a way that feels natural for you.”

Google has also given some example of how BERT has affected the search. Here are some of those examples:

In one example, Google showed the difference of results before and after BERT update for the same query. In the query “2019 brazil traveler to usa need a visa,” the word “to” and its relationship with both the word are important in understanding the actual meaning of the query. The query is about Brazilian travelling to the U.S. and not the other way around. Previously, Google algorithm was unable to understand the importance of this connection, and they returned results about U.S. citizens travelling to Brazil. However, after the BERT update, Google was able to understand the importance of the word “to” and gave much more relevant results than before. 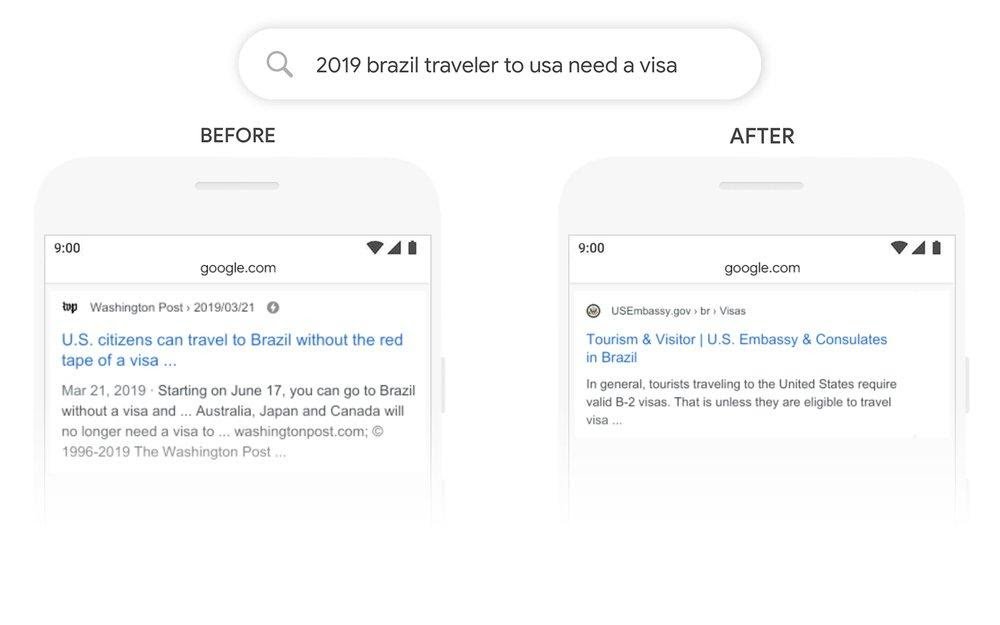 In one more example, Google showed the difference of search results for a query before and after the BERT update. For the query “do estheticians stand a lot at work,” Google matches the terms “stand-alone” with the word “stand” used in the query. However, this was not the right use of the word in the context. After BERT update, Google was able to differentiate between the terms and gave relevant results based on the query. 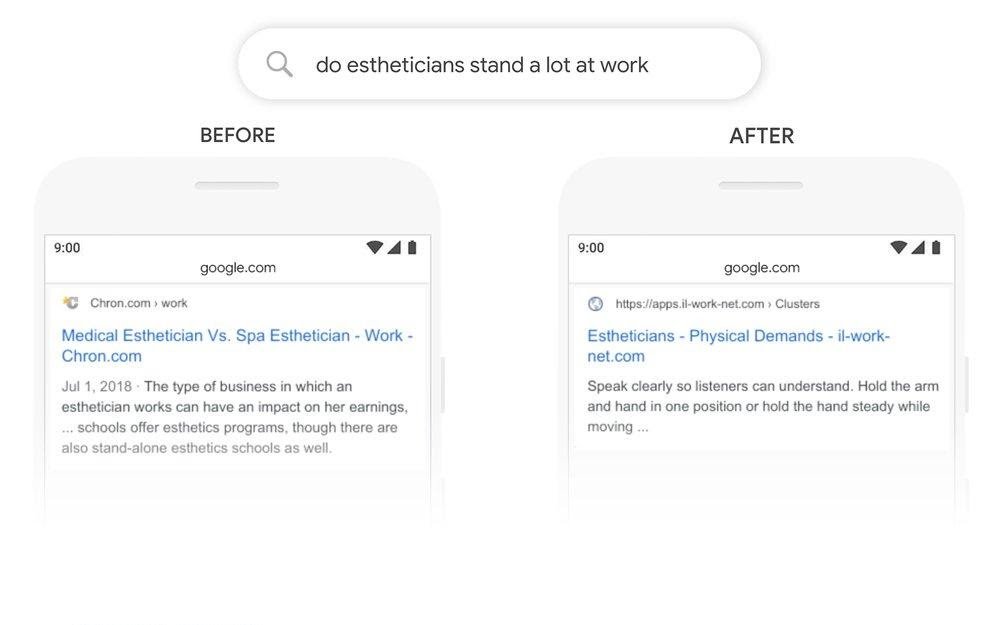 Here is one more example given by Google on How BERT has helped them grasp the language that machines don’t understand the way humans do. 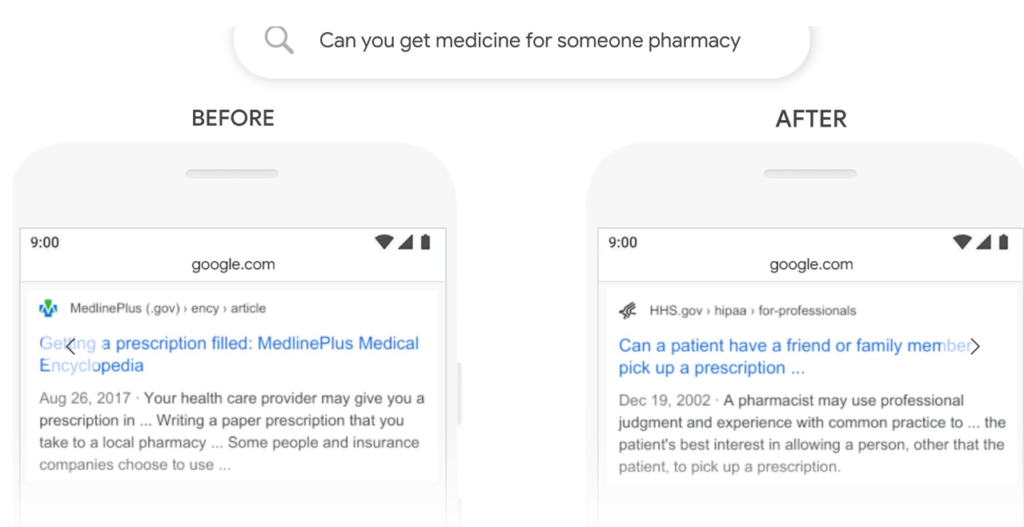 In a featured snippet example, Google showed much more relevant result for a query after the release of the BERT algorithm. Google said, “We placed too much importance on the word “curb” and ignored the word “no”, not understanding how critical that word was to appropriately responding to this query. So, we’d return results for parking on a hill with a curb.” 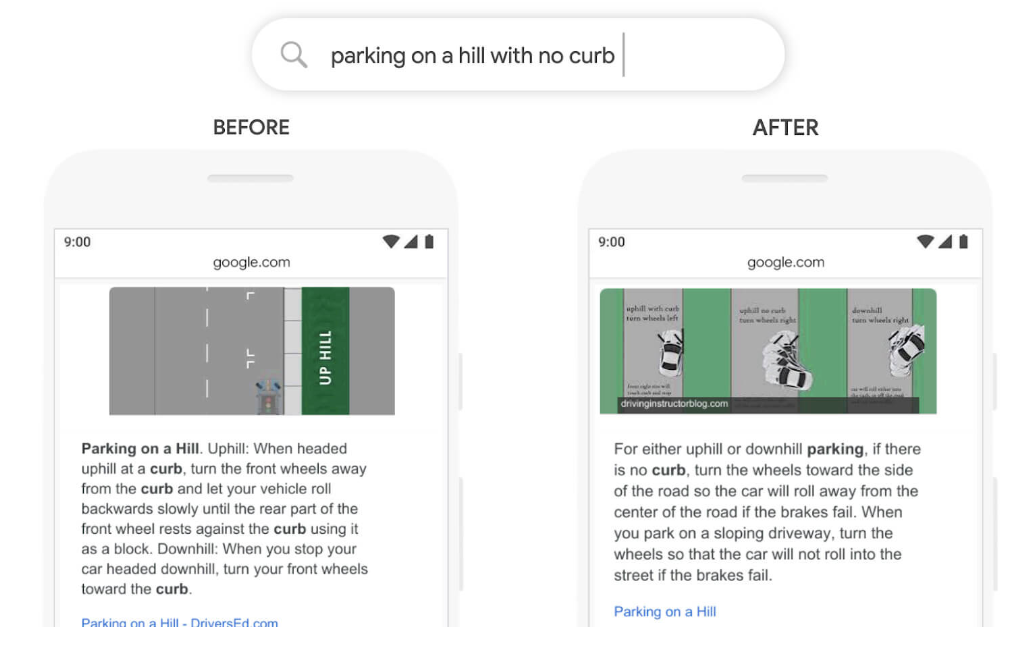 If you’re interested in reading more about such examples of how BERT affected the Google search then you can read it here: Google Blog – Understanding searches better than ever before.

There are no actual guidelines that you can follow to optimize your website for BERT. However, there are some things that you can do to optimize your content for BERT. Write quality content for the user. Make sure that whatever you are writing answers the query searched by the users. The end goal of Google is to provide the best user experience possible. Websites that prioritize user experience before anything else does well on the search engine result page.

Your content should match the intent of the searcher. Your content should answer the question asked by the user briefly. Google understand the search intent much better than before. You can’t manipulate search ranking by just inserting “relevant keywords” in your webpage. Other than these, you should focus on your on-page optimization.

BERT is going to impact more than 10% of all queries on Google. This is a significant change, considering the number of queries performed on Google.

With its every update, Google has tried to improve the user experience. Many pages have been impacted after the BERT update of Google. Your first primary focus should always be providing a great user experience if you want to succeed in your SEO career.

How to use Google Ads?

Wish to get in touch?

Our team is always there to listen to you!
Contact Us

Learn the latest SEO trends and find the right SEO companies to promote your brand. We are a real data-driven website with the latest digital news, reviews from real clients, research-based data and comparison of the top trending SEO agencies to give a kickstart to your next digital project.

Copyright © 2022 All Rights Reserved by KATEXS.